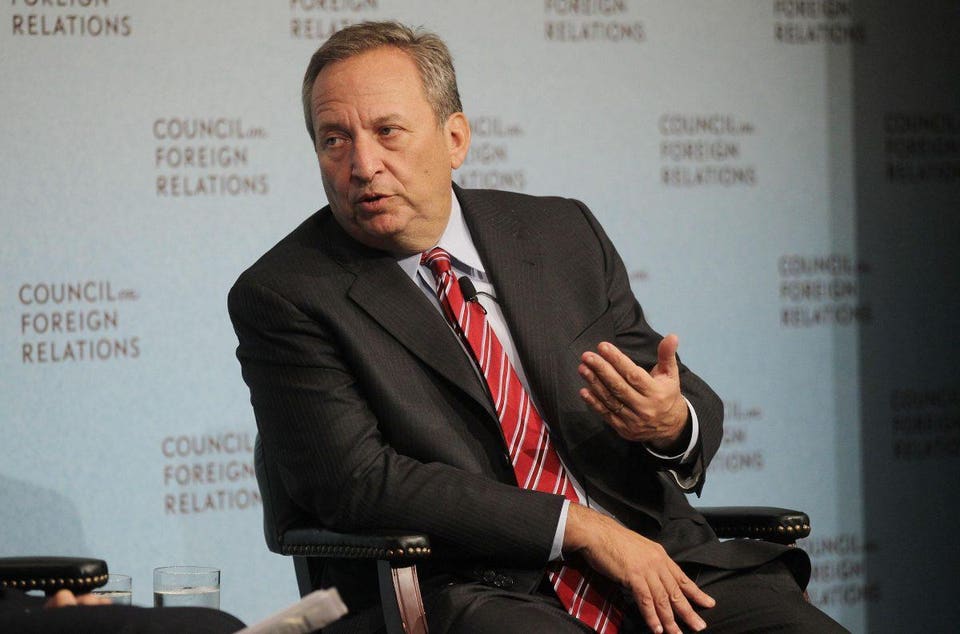 Larry Summers is as blunt as economists come. The onetime U.S. Treasury secretary also has a knack for apt analogies that bring the dismal science to life.

Case in point: Summers calling Donald Trump’s brawl with China a “sadomasochistic and foolish trade conflict.” He did just that Sunday in an interview with CNN’s Fareed Zakaria. Separately, Summers told Bloomberg that the U.S. and world economies are at their riskiest moment since the 2008 crisis.

"Sadomasochistic" certainly fits when you consider how Trump is hitting China with all Washington’s got, and hurting the U.S., too. Summers is hardly alone in fearing the Trump Show ends in recession. Goldman Sachs also fears Trump’s China trade brawl will end in a downturn heading into the 2020 election.

Granted, Goldman Sachs isn’t formally predicting a recession. It is merely telegraphing the growing odds of one. Connecting the dots, though, it is hard not to fear the worst. Goldman Sachs economists, for example, just lowered their fourth-quarter forecast for U.S. growth to 1.8%. That isn’t much of a cushion, considering how global uncertainty is savaging corporate spending and investment and consumer sentiment.

Summers, though, has seen more than his fair share of financial madness. I was among the handful of journalists who traveled with him around Asia in 1997 when the region’s economies were ablaze with contagion. That was when he was deputy Treasury secretary under Robert Rubin. That’s the first time I heard Summers compare an economic policy to sadomasochism. The reference then was to Asia’s competitive currency devaluations, which only panicked markets even more.

Later that year, his team contended with the collapse of Yamaichi Securities, one of Japan’s biggest brokerages. In 1998, Russia defaulted, pushing the global financial system back to the brink. A decade later, Summers was on fire-brigade duty again after the collapse of the Lehman Brothers while serving as head of Barack Obama’s National Economic Council.

Summers isn’t always right. There are valid criticisms that his different teams are too heavy handed toward Asia in 1997, and too easy on reckless Wall Street bankers a decade later. But when an economist this battle tested warns Trump is blundering his way toward ruin, it’s best to listen. Especially given how all this is playing out in Beijing. China, after all, is getting the better of the U.S., one Trumpian own goal at a time.

Is President Xi Jinping enjoying the trade war? Heavens no. The $250 billion of goods Trump has taxed at 25% for more than a year just produced the slowest Chinese growth in 27 years–6.2% in the first quarter. The additional $300 billion this White House will tax at 10% is a fresh headwind at arguably the worst possible moment.

There’s no doubt that Trump is greatly complicating Xi’s plan to dominate everything from renewable energy to semiconductors to self-driving vehicles to robots to artificial intelligence by 2025. Xi has hoped to rely on China’s export engine a bit longer, while his team of reformers enlivened innovation and high-value-added industries to replace factories, smokestacks and low-wage jobs.

Trump’s tariffs forced Xi to throttle back on "Made in China 2025." It is fair to say, too, that Trump throwing sand into China’s export machinery moves Xi toward greater statism. On the one hand, it’s the growth strategy Beijing knows best. On the other, any move to placate Trump would likely have state-owned enterprises buying up U.S. soybeans, cars, you name it.

Even so, Aesop’s fable about the tortoise and the hare may be the best lens to view Trump-versus-Xi. Trump is the hare, of course. He’s racing full speed ahead with his tariffs and threats, all confidence and hubris. Xi is plodding along, policy-wise, keeping his eyes on the 2025 prize and beyond. The risk is that, like the hare, Trump’s America burns out only to see the steadily progressing turtle–China–reach the finish line first.

Among Trump’s biggest missteps: an epic misunderstanding of how the global trading system has changed since the 1980s. Back then, Trump the real estate magnate railed against an ascendant Japan. In the late-80s, Trump routinely appeared on television talk shows complaining that Tokyo had “systematically sucked the blood out of America–sucked the blood out! They have gotten away with murder. They have ended up winning the war.”

This language will sound familiar to Xi’s Communist Party. Yet Trump’s stuck-in-time worldview ignores that neither America nor the Group of Seven nations calls the shots anymore. Back in 1985, G7 officials had the clout to devalue the dollar versus the yen–to have their way with markets. In today’s increasingly multi-polar system, such groupings have far less influence.

In the 80s, tariffs might’ve worked to some extent. That was long before China, India, Indonesia and other manufacturing powers came online. Today’s wage disparities mean tariffs aren’t going to pull millions of jobs back to America. It's more likely to just drive them to relocate from China to Vietnam and the Philippines.

Why, then, would Trump be engaging in risky China-focused activity that courts a U.S. recession? Goldman Sachs will not be the last to warn about the R-word. In his Bloomberg interview, Summers indulged in other metaphor. “You can often play with fire and not have anything untoward happen,” he said, “but if you do it too much you eventually get burned.”

Again, Xi isn’t enjoying the trade war. But only Trump faces an election next year. And only Trump can reduce the boomerang effect of his own policies hitting the U.S. economy. Sadomasochistic and foolish, indeed.

I am a Tokyo-based journalist, former columnist for Barron’s and Bloomberg and author of “Japanization: What the World Can Learn from Japan’s Lost Decades.” My journalis...